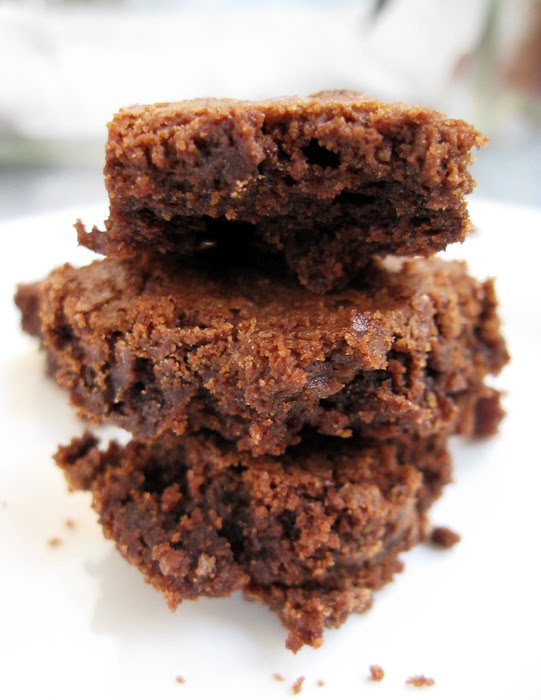 
Awhile back, I attempted brownies and I was disappointed by what I made. This time around, I made major improvements. I followed the recipe and didn't make any substitutions. See...I do learn from my mistakes.

However, I royally screwed up in the last 7 minutes. The brownies were baking wonderfully in the oven and kitchen smelled like chocolate. Everything was going great until I got too confident. I decided to check on my brownies and they looked done even though it was 7 minutes too early. Ignoring my instinct, I took the brownies out to cool. That's mistake Number 1.

Because the brownies were undercooked, they were super moist, mushy, and wouldn't hold together. Need more clarification? I needed a spoon to eat a piece of the "brownie." yeah...they were that undercooked.

My "brilliant" idea to fix the error was mistake Number 2. I decided to bake it again. Yes. I took the room temperature brownie and stuck it back in the oven for another 10 minutes or so. The brownie appeared perfect when it came out of the oven the second time. When the brownie cooled down, my mistake was much more apparent. The "brownies" were crispy on the outside and chewy on the inside like a double chocolate cookie. /headdesk. 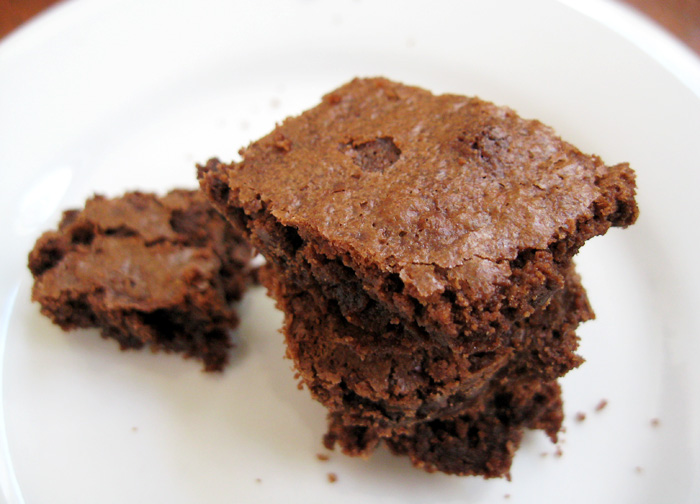 Email ThisBlogThis!Share to TwitterShare to FacebookShare to Pinterest
Labels: fail

I was still in bed one morning feeling abandoned and depressed. I hear the front door open and loud footsteps coming down the hall. JSB bursts through the door into my room and exclaims, "I HAVE A SURPRISE FOR YOU!" I eyed her suspiciously. (JSB Lesson 101: Never take what she says literally.) I asked if she could show me later. She denied my request and insisted that if I don't get up now, I won't get it.

Because I'm a sucker for surprises, I crawled out of bed and followed her into the kitchen. There wasn't anything on the kitchen table so I turned to JSB. She gives me an evil smile and proudly presents to me a napkin.

Only this face can imitate my expression: O.o

I carefully open the napkin and I see a cracker with some spread. 
I gave her the look again: o.O

If you don't eat it, I'm going to take it away.

[Piee puts the mystery item in her mouth] It was sweet, creamy and delicious.


Oh. It was the free sample from Trader Joe's that made a dangerous journey in JSB's pocket from the store to home. You know what the real shocker is? The sample actually made it home in one piece. <3 <3 JSB <3 <3 Cliff notes: This entry is dedicated to JSB and I lub her and her shenanigans.

Posted by Piee at 9:20 PM No comments: Links to this post 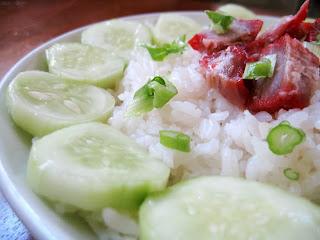 A. All elements on the plate are clearly shown and I'm following rule of thirds.

This was my lunch awhile back. I wasn't particularly hungry so I decided to practice plating. It's never a bad time to practice in my book. 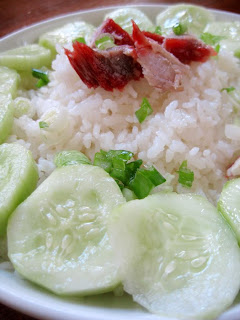 B. All elements are shown. However, the composition
isn't as interesting as the first photo. 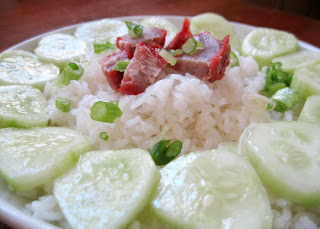 C. It's a nice over view photo, but not very dynamic. It does not engage you visually. 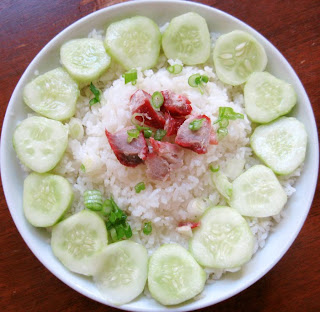 Although my best photo is considered "nice" compared to my first blog post, there are so many other aspects I wish to improve on. I find my light source distracting, especially the highlight in the bottom left corner. My plating abilities are better, but I need jazz up my background and work on composing photos.

Until next time,
Piee
Posted by Piee at 12:51 AM No comments: Links to this post

Email ThisBlogThis!Share to TwitterShare to FacebookShare to Pinterest
Labels: confessions

After I made Stewed Prunes the first time around, I was craving for more a couple days later. That very night, we were also out of oranges and all other citrus fruits. I was determined to make my prunes and I was going to find a companion for them. 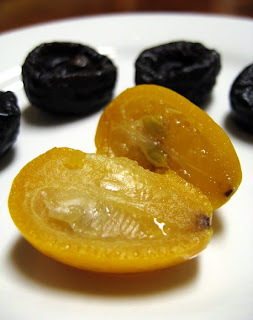 I opened the fridge, searched, and found a jar of preserved kumquat. I was elated. I figured kumquats would work, because they have rinds, pulp, and a sweet taste. Since my mom preserved them in brown sugar, I should have no problem with the taste blending with the prunes.

I followed Molly's recipe again. The only change I made was replacing the citrus with kumquats. 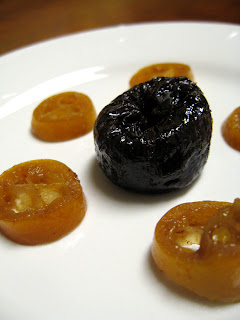 After.
The results were less than stellar. It tasted like boiled prunes. The kumquat didn't give off any flavor. I'm not sure why, but I'm guessing it's because the kumquats didn't have enough juice in them to make an impact on the prunes. I won't try it again with kumquats. 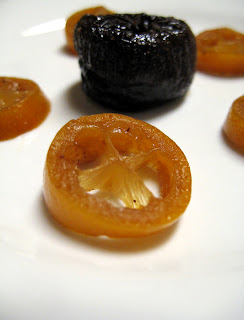 After.
Note: My attempt at plating needs improvement.
Posted by Piee at 10:31 PM No comments: Links to this post