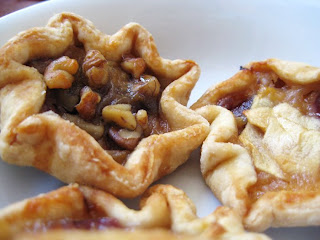 View of the 2 Tarts.

It's been awhile since I "failed" at making a creation. To be fair, it wasn't all me. I'm too good to mess up this poorly. What happened? Well, I'll have to start from the beginning.

I was over at my friend's place and we impulsively decided to make desserts! We had a sudden craving for sweet sugary, crispy goodness. He wanted a thin, flaky, puff crust with a simple filling. We googled a simple crust recipe and we improvised the filling. The crust was easy enough: sugar, flour, butter, salt, and several tablespoons of water. The filling was even simpler: dice up some peaches, boil sugar water, add peaches, and reduce into a thick sauce/paste. Everything was coming together perfectly. My friend began making miniature sized tarts, and I topped it with filling. On top of that was either a sprinkle of pecans or apple slices. Quite pretty, I gotta admit.

We pop the goodies into the oven and waited...the aroma of the buttery crust filled the kitchen. I was beginning to drool. The timer finally went off and we took the goodies out of the oven. I couldn't wait...I grabbed a spatula to lift a tart off the cookie sheet and onto a plate. I used a fork to break off a small piece. 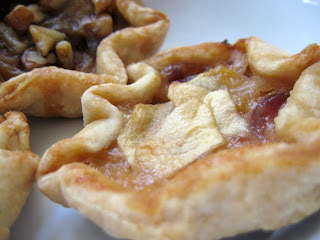 Apple Topped Apricot Tart.
I was expecting a crispy, light crust with a hint of sweetness from the filling. Guess what I got instead...

An overly salty, buttery crust that tasted like saltine crackers.

WHAT?! I know....be glad you're reading about this and not facing this mess in person. I was so so so sad. I was waiting for something spectacular and I was soooo hungry.

Turns out the butter was salted already, which was why the extra salt I added to the dough messed everything up. /sigh. Next time, I will prevail and beat the salt!!! Muahahahaha.
Posted by Piee at 10:06 PM No comments: Links to this post

Don't you hate great ideas, but poor execution? I had a craving for matcha and I had the brilliant idea of making matcha sugar cookies. Sounds simple right? Use a sugar cookie base and add matcha powder, then BAM! AWESOME MATCHA COOKIES!! Whoooo! NOT! I wish, I wish, I WISH! It turned out as well as I imagined. Here take a look at my product: 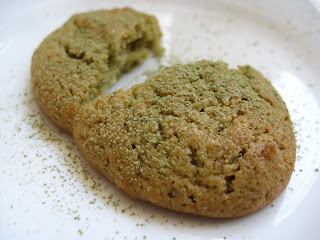 What's wrong with it you ask? Well, a number of things. First, it tasted like a sugar cookie. No matcha flavor whatsoever. I put 2 tablespoons of matcha powder, but that wasn't enough. Second, it was overly soft...not chewy, soft and that's gross. I love my cookies crispy on the outside and chewy on the inside. What else did I learn? Cheap matcha = cookie fail. =( Perhaps next time, I will add heaps of powder instead of skimping on it. My biggest fear is that by adding too much, my cookie might taste bitter instead of having a hint of green tea to it. 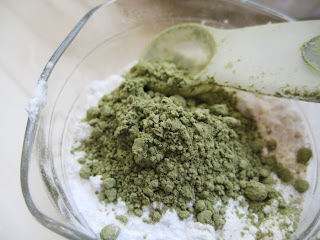 I love the color of matcha.
Posted by Piee at 10:05 PM No comments: Links to this post 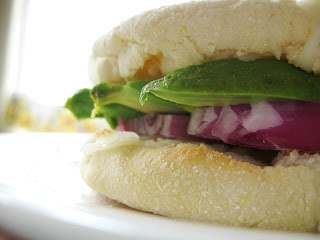 The healthiest, easiest sandwich ever if you don't want to leave the house. Toasted English muffin with melted cheese on both sides of the bun, a slice of red onion, and half an avocado. Oh my...so simple, yet so good.

Call my taste buds boring, but I love tasting the natural flavors of fresh veggies. So go screw yourself if you think this is naaaasty. Hrrrmp....more for me in the long run.
Posted by Piee at 10:04 PM No comments: Links to this post