Wow. Hosting a dinner party was a new experience. Deciding on a theme, planning a menu, preparing and cooking the dishes, and breaking out the camera to take photos were all part of my checklist. Guess what? None of it went the way I planned. NONE!!

First, the theme was "Nerd" done gossip girl style. Sounds sexy cute, right? I had an outfit in mind to change into after I was done cooking and prepping all the food, but I never got to the change-into-outfit part. I was running around making sure everyone and everything was alright. Luckily, none of my buddies dressed up except for the one that came up with the theme. ahahah. ^.^

I didn't expect to have so much fun planning and organizing a menu. (Of course, I had 2 buddies helping me out).

I had the best time figuring out the ingredients and shopping. I always knew I enjoyed being organized, but I didn't expect to have so much fun doing it. I did make one change on the day of the dinner. The original appetizer was vienna sausages & pineapples. Gross. However, I managed to convince my friends to change it to melon with prosciutto with the help of JSB! yay!!! I nommed through the appetizers.

Originally, I wanted to do most of the shopping the night before, but my friends told me that it wasn't necessary and we could complete it the same day. I did an eyebrow twitch and they told me not to worry, but worry I did! It's a good thing I worried and purchased some ingredients on my own the night before. Dinner was suppose to start at 7, but we didn't get back to my house until 5:30 when we went shopping at 4 PM!! Talk about the stress I felt since I need organization and structure in my life in order to be at ease!!

(Anticipating chaos at night, I made my creme brulee and I prepped all the ingredients needed for my apple crisp before we went shopping. yay to thinking ahead!)

Oh gawd, prep work was when the nightmare began. First, our kitchen is tiny. Not a lot of workspace so only 2 people can prep at once. My buddy was in charge of the entree, but he was socializing so I ended up prepping for him. I had my sister making melon balls out of honey dew, cantaloupe, and watermelon. I had a family friend and my other sister making melon and prosciutto balls. After they completed the first task, I had them working on slicing bread and plating up everything. I seriously felt like I was running a Chinese "family" run restaurant outta my kitchen, meaning I slave them away with no pay. The only form of payment is food. lol.

I yelled at my friend to get his butt into the kitchen and get his dinner started, because it was nearly 7 and his chicken needed to be baked!! aiiiyaaaah. Paniiiic!! Of course, he is the type that thinks everyone runs on his time so he takes his time and tells me to relax. Another eyebrow twitch comes from me and I get started on the alcohol. I needed a drink.

All the appetizers and bread have been devoured and all the guests are hungry. Drinks are being made, jello shots are being passed around, and salad is served to hold off the hunger. Finally, food is served at 9:30 and as luck would have it there is NOT enough food for my buddies. Oyeee.

The worst part of the night was not being able to take photos of my creations. I was in the kitchen the whole night working on the food and cleaning up as we worked so I would have less to clean up later. The only photo I had was of my dinner and it is not a pretty photo either. ='( 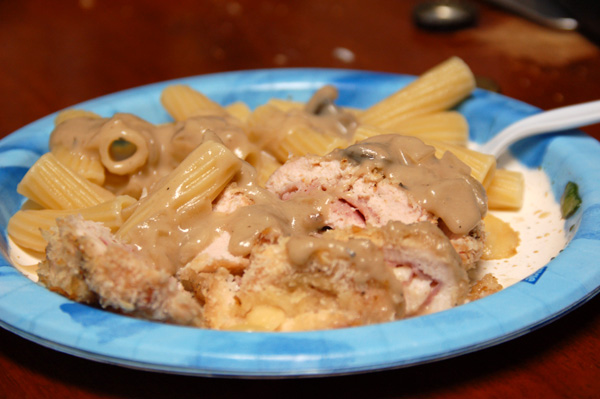 What I have learned:
1) Buy all ingredients a night or two before the party.
2) Prep the majority of the ingredients the night before and in the morning.
3) Must have a dinner party again and see party 2.0 rock.
4) Finish cooking everything early so I can take photos!! =(
5) Theme? What theme? Forget about it, I want board game nights!!
Posted by Piee at 9:44 PM No comments: Links to this post 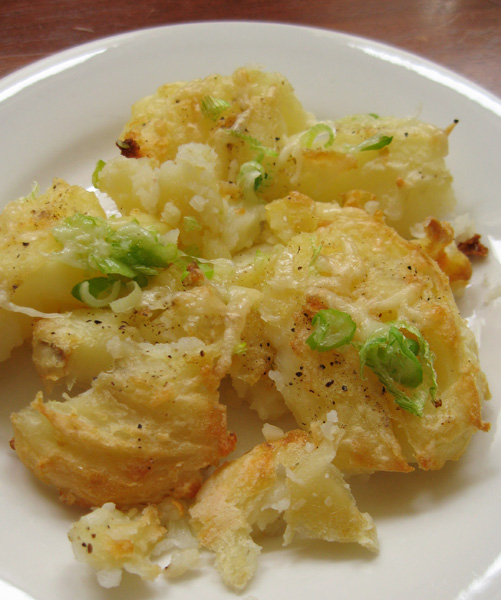 I've been writing so many essays recently that I haven't found the energy or inspiration to blog. I hate it. I miss having all the extra time to bake, take photos, and write about what happened. All I do now is bake, bake, bake, eat, eat, eat, sleep, sleep sleep, school, school, school, work, work, work, see the b/f, rinse and repeat. I've been so horrendous at writing that it took me 3 weeks to respond to my sweet dear friend that lives on the other side of the globe. Shameful.

Today, I leave you with a simple delicious potato recipe. 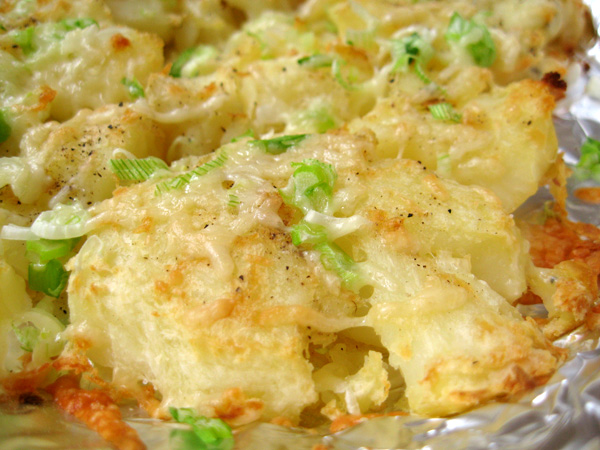