When I attempt a recipe and it goes south, I die a little on the inside because I hate wasting precious ingredients. Perhaps, I should define "precious." All ingredients are precious in my eyes, including cheap items like flour and sugar.

I can complain all I want about wasting ingredients, but I can't do anything about it since the baking life cycle includes making errors and learning from it. No matter how many mistakes I make, I refuse to give up. Giving up means failure and my ego will never let that happen.You need proof? Check out my past brownie attempts. *angry face* 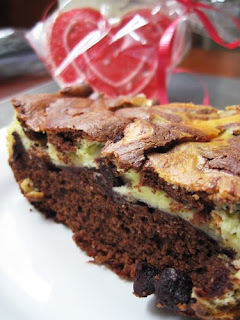 It looks fine here, but it's
all about the
angles.
What happened this time around with brownies? The usual happened. It hates me regardless of what I do. If it's brownie based, it refuses to bake in my favor. I ended up over-baking my cheesecake brownies. The brownie portion became a firm cake and the cheesecake layer was chewy with a thin crispy layer on top. 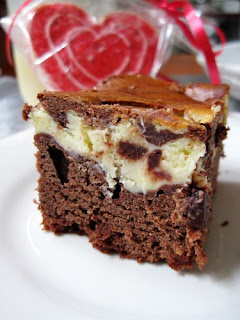 The "brownie" looks rather
lifeless, doesn't it?
Posted by Piee at 11:05 PM