How did the sugar challenge go?  I lasted until May 15th before I consumed sugar. The thing was that I didn't even want it. I ate it, because I paid for it (it came with my  meal) and the frugal side of me didn't want to waste it. I also cheated several times after that. After my challenge, I felt less inclined to binge on sugar. When I did have a cocktail to celebrate, I found it too sweet and didn't even want to finish it. Also, when I do have cravings, I will take a bit or two and I am satisfied.

During my challenge, I cooked plenty of savory dishes, but I never photographed any of it, because I found a new love that consumed my time. Photography wasn't a priority anymore, but I will definitely get back into the groove of things. The new love? Diablo 3. Well, time to get back to my lover...Oh & Enjoy the recipe! 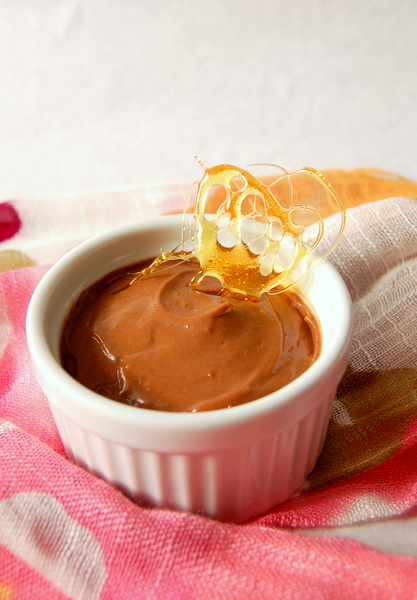 Note: I originally made her chocolate pudding to bring back childhood memories. It did and I was smiling like the Chersire cat when I was devouring the pudding. The only issue was that I found it a tad too sweet. (I suppose that's a sign that my palate matured?) I decided that there was a way to fancy up the pudding and I present to you Caramel Chocolate Pudding. It's doesn't taste sickeningly sweet, because of the unsweetened cocoa and the bitterness from caramel. Also 4g of powdered gelatin works as well. You'll have a thicker pudding. This recipe works with skim milk, but it certainly tastes better with 2% or whole milk.